Year Of The Selfie: Project Mustache

Since linguist Geoff Nunberg nominated the 2013 Word of The Year to be selfie, I decided to play my part in flighty puerile narcissism.

So over the holidays, I birthed, harvested, and slaughtered a mustache… on my face!  Its lifespan represented the duration of a six-week two-tailed double-blind randomized control trial. 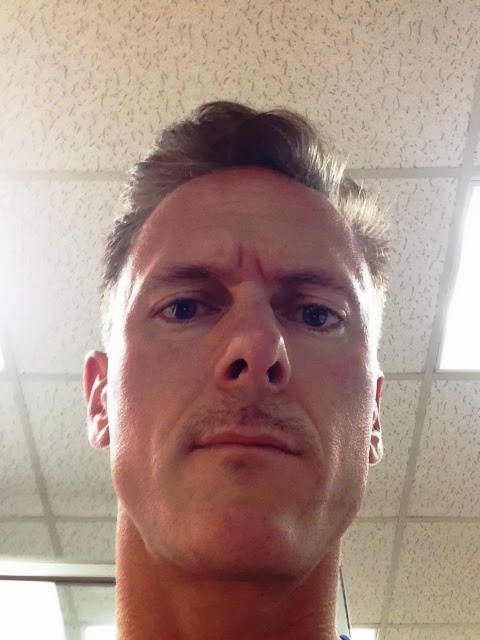 (Day 1)
…My coworker, who has near-superhuman olfactory and auditory faculties, is particularly un-fond of mustaches.
She objected to mine, even in its fledgling stages.

Coworker (rounding the corner of my cubicle): “Eww. I knew it! Are you growing a dis-gustache for Movember?”
Me: “What’s Movember? And how did you know I was growing a mustache?”
Coworker: “I can smell a mustache from a mile away.”
Me: “My mustache smells fine.”
Coworker: “I just knew one was in the building.”

One time she was listening to the Diane Rehm Show and she accurately determined that one of the panelists had a mustache—on the radio.
(On the radio.) 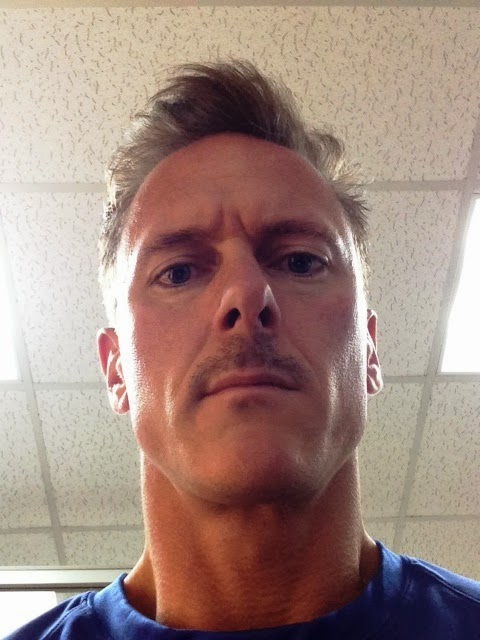 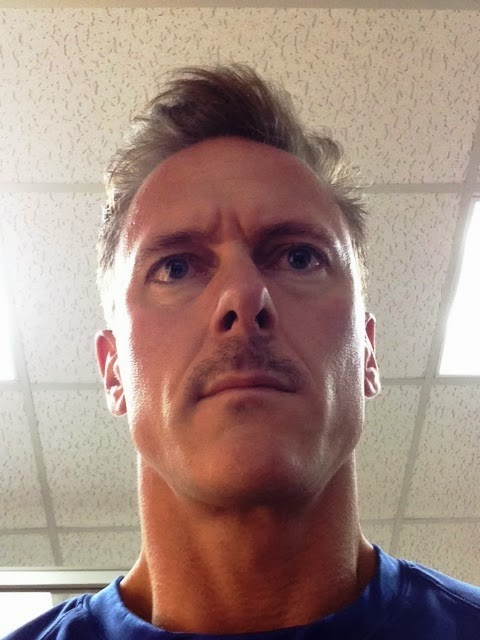 I wish this had been my Senior Year Book picture… instead of this one. 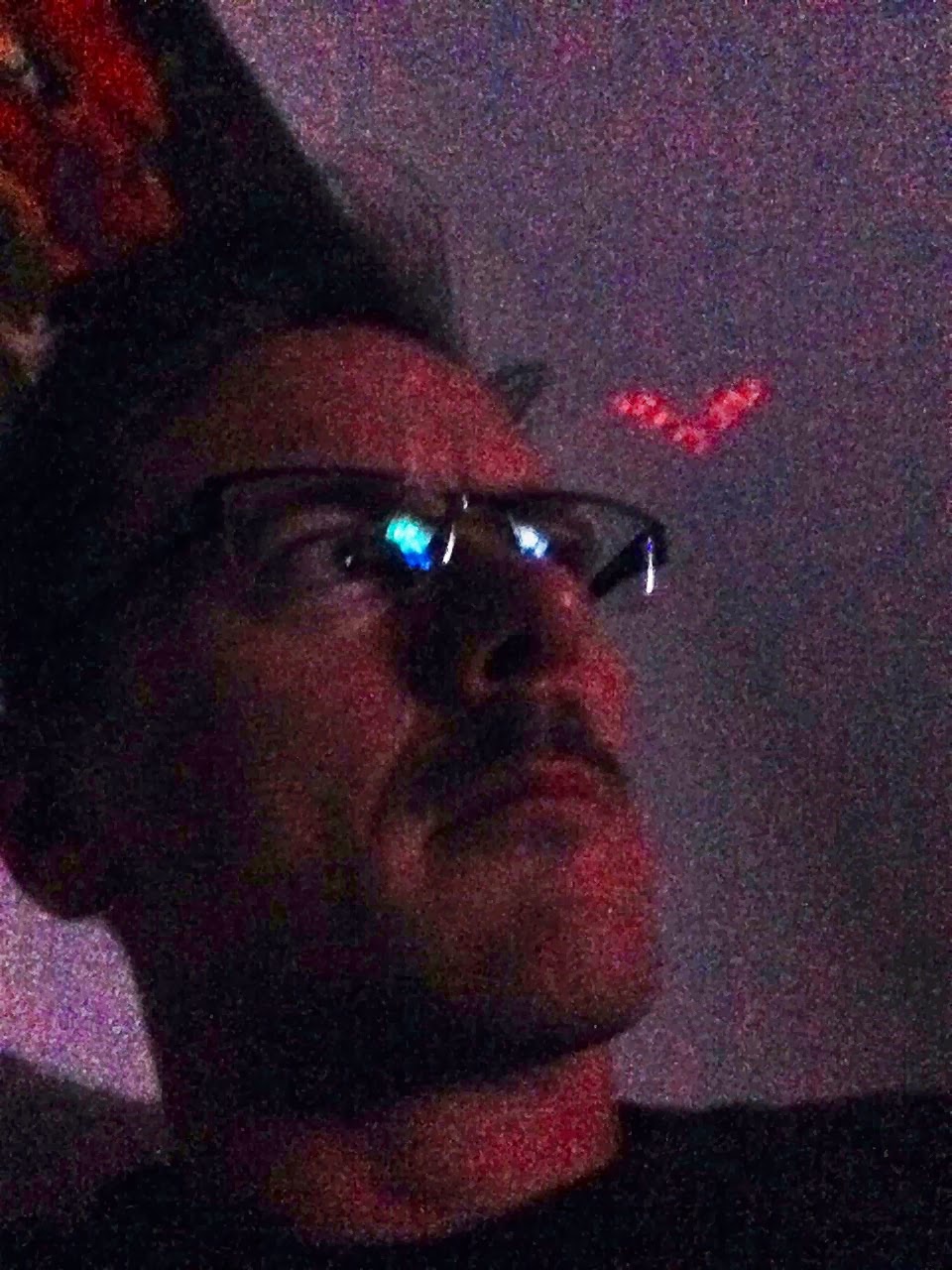 (Day 14)
A friend of mine is dating my officemate who has the distaste for mustaches. Contrarily, he cheered me on, and wanted a growth update at 2a.m. on a Friday. I texted him that a tiny bat-shaped UFO was spotted flying around my bedroom, and it imbued my mustache with a telepathic messaging system. Benicio then made his presence known. Benicio The Mustache. 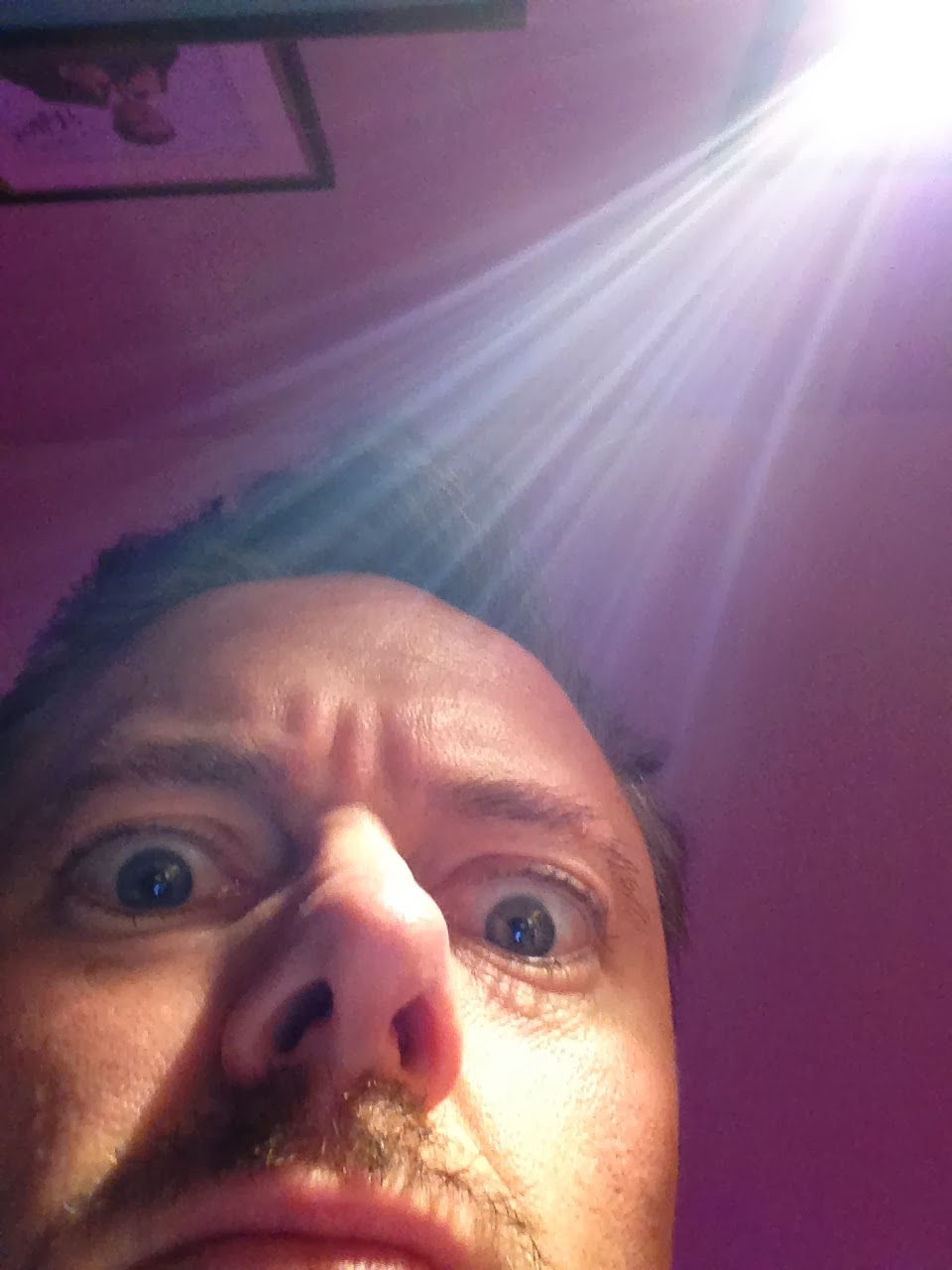 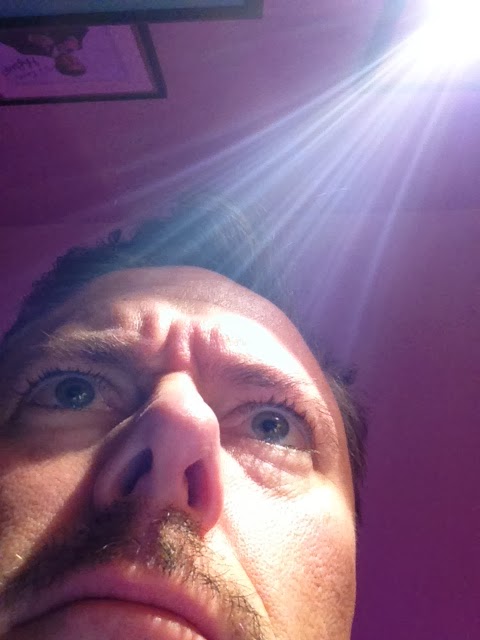 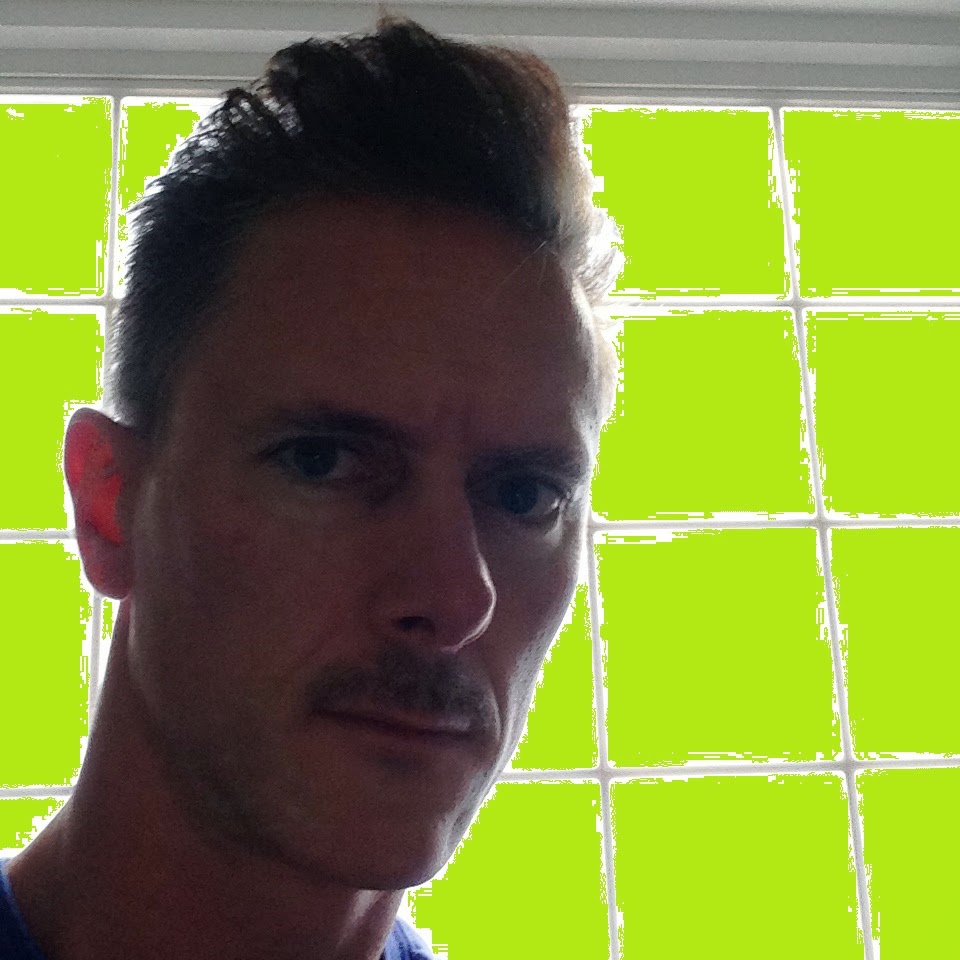 (Day 16)
The next morning, my reflection in the bathroom mirror revealed a terrible, terrible new wave album cover from 1983.
I wasn’t sure how to face the day this way… 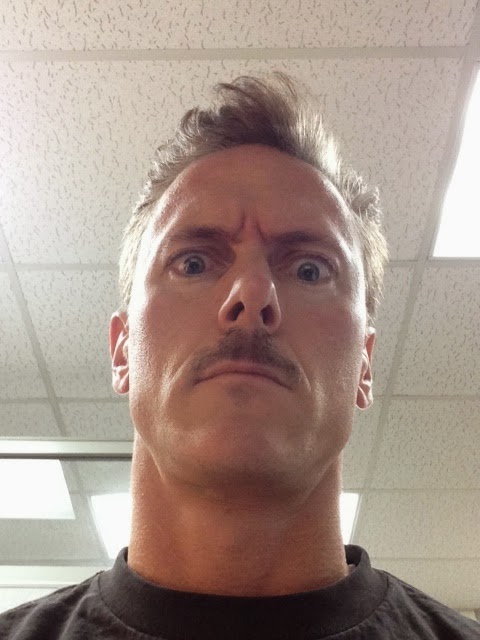 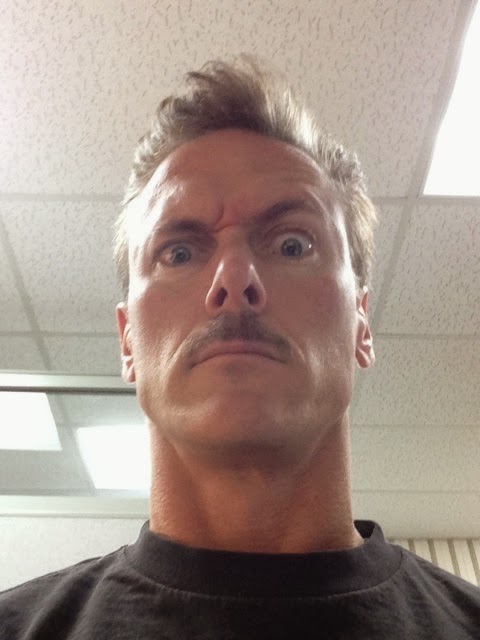 (Day 20)
Benicio doesn’t say much. He tends to just leer and glower. Irritability and discontent are percolating, and I think my boxer briefs are riding up. 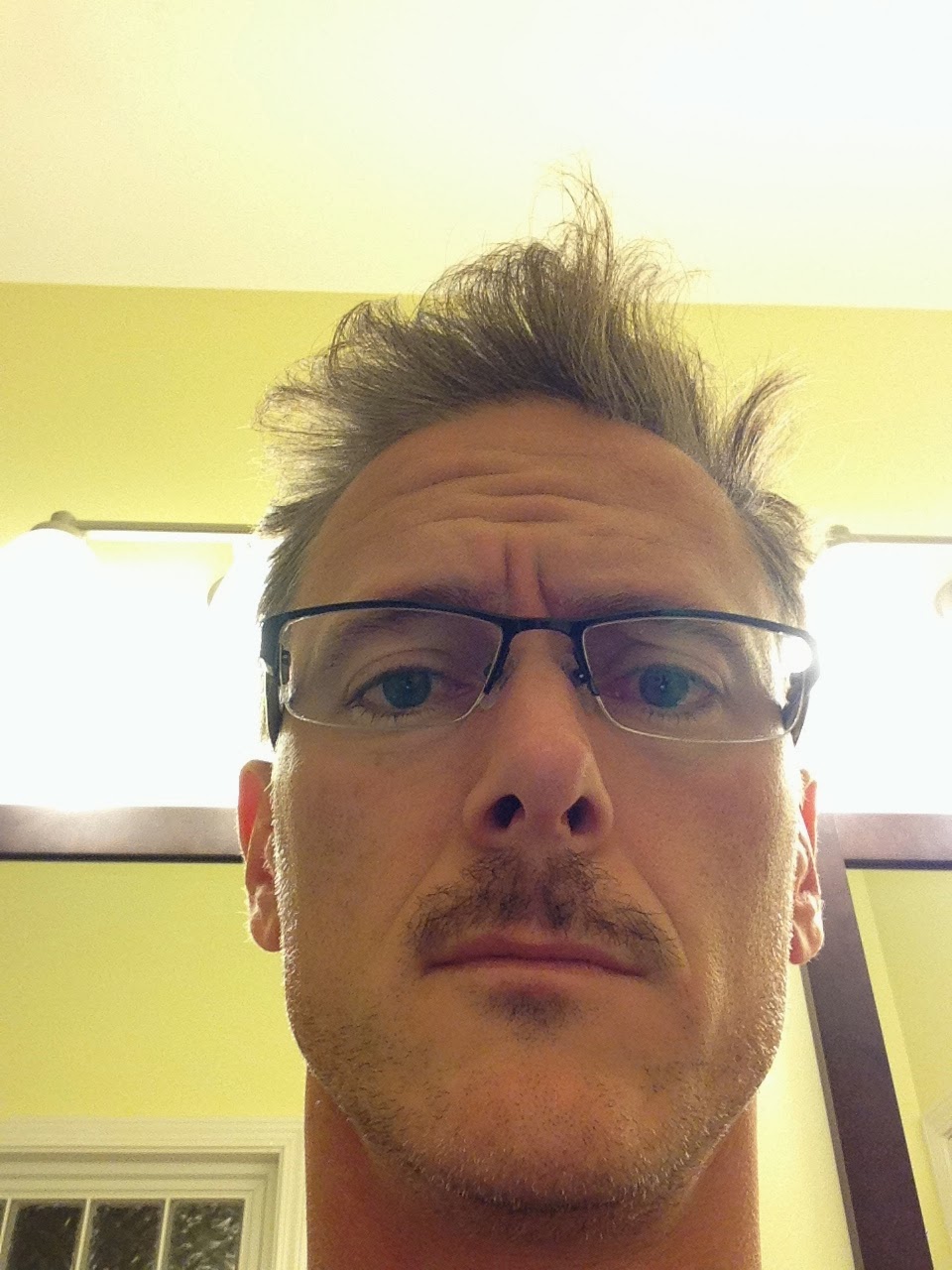 (Day 22)
Sometime during the night, my mustache suffered a sprain, and I didn’t feel so great myself. The dweomer of Benicio seems to have vacated the labial region. Admittedly, I was confused… and bereft. 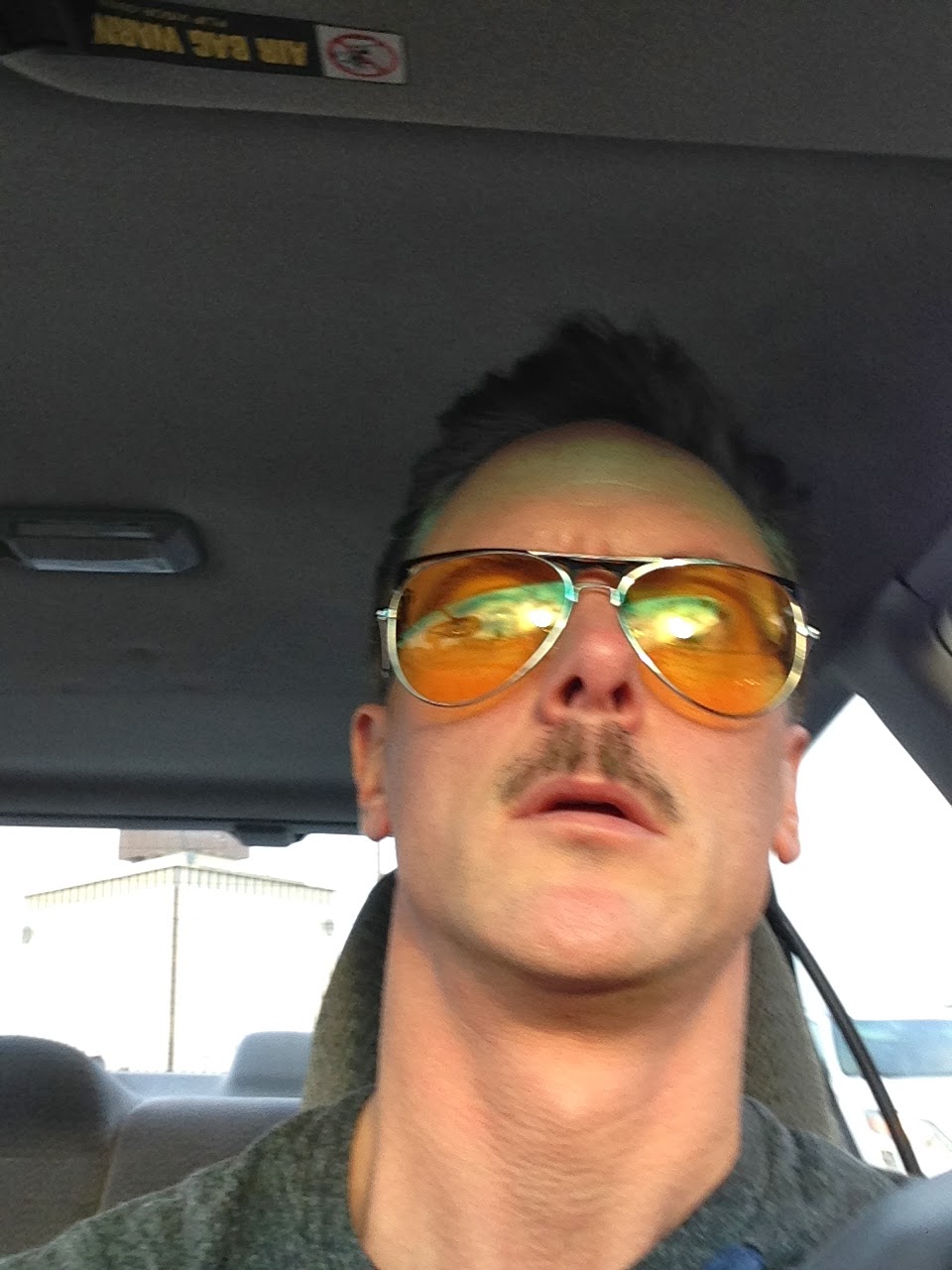 (Day 25)
Whilst driving today my mustache sprouted a pair of my uncle’s aviator shades, and a butt-cut. Terrifying. 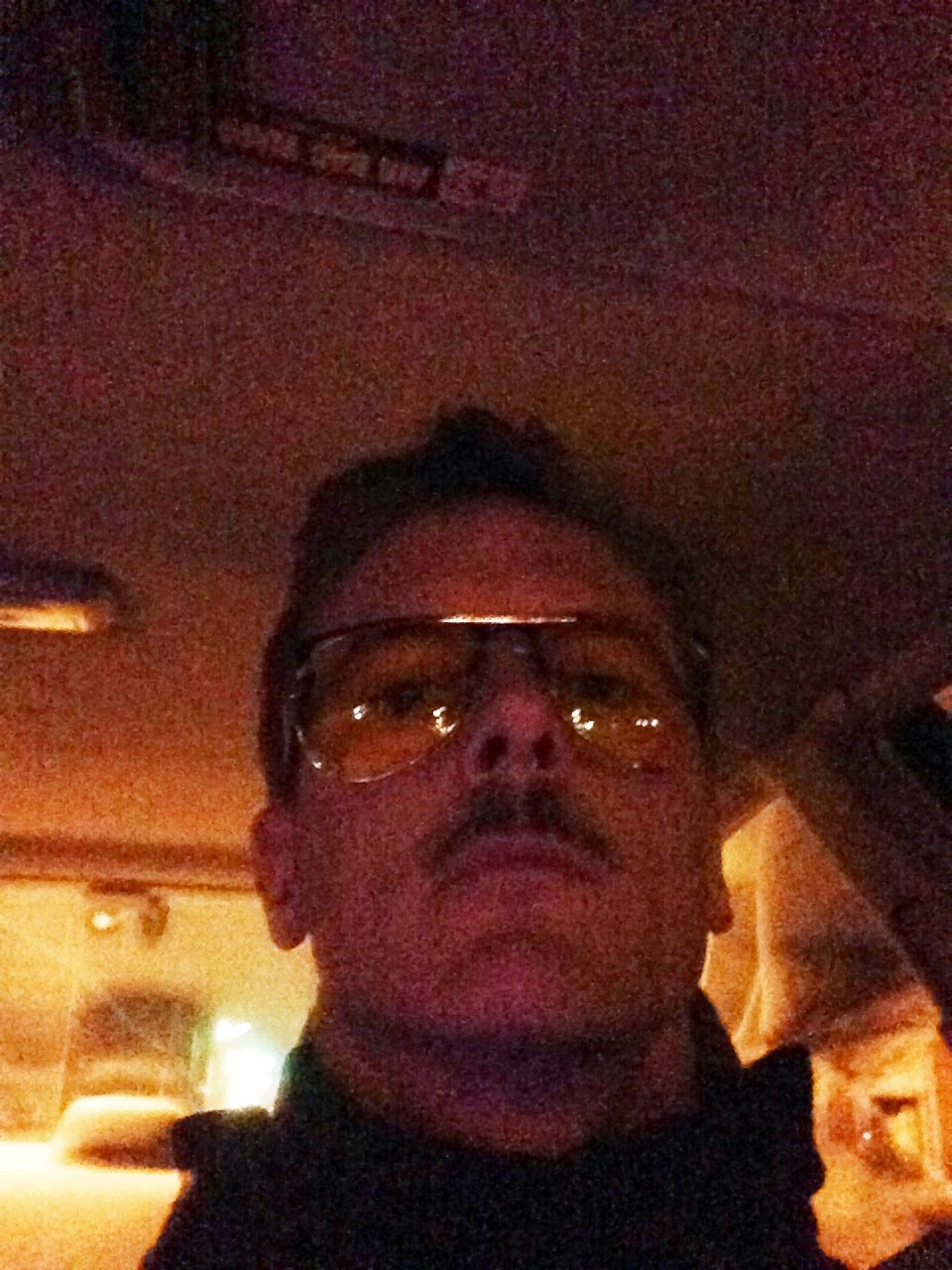 Driving at dusk on these short winter days proved challenging. Fortunately, the shades were of the yellow night vision variety, As Seen On TV. Eventually I persuaded my mustache to loose its grip on the shades in exchange for a Pumpkin Spice Latte at Starbucks. 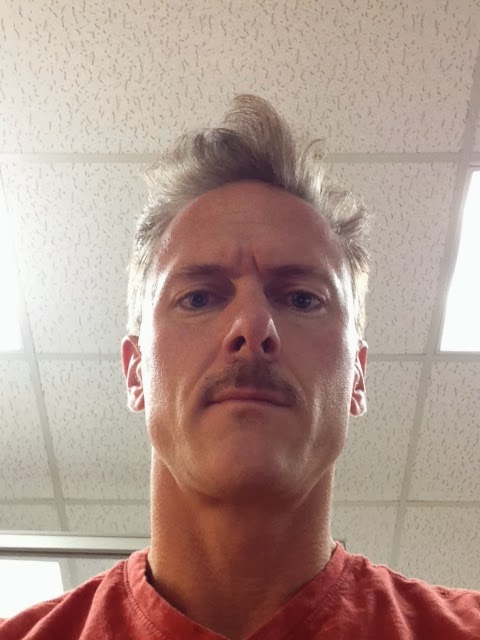 (Day 27)
No new developments, except that my wife declared her resolve to shave off this atrocity in my sleep. I could only reply that she must refer to him as Porter, and Porter was not beruffled* by her threats.

*Totally just made up that word , Dr. Nunberg. 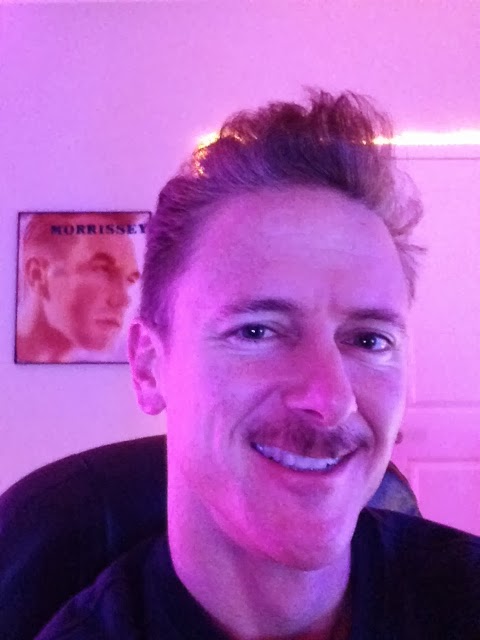 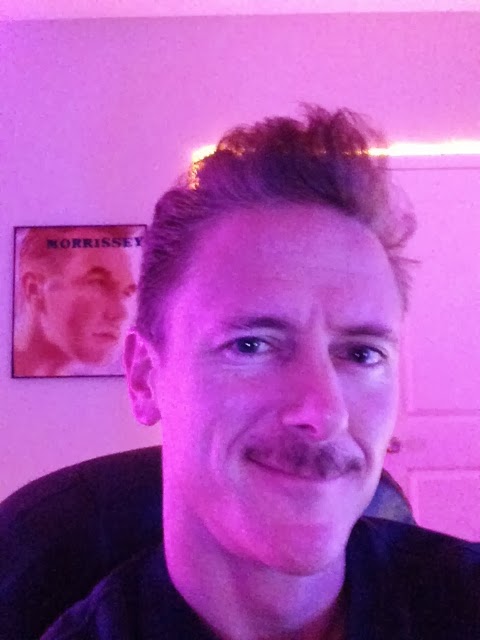 (Day 30)
A quiet evening at home with Porter. 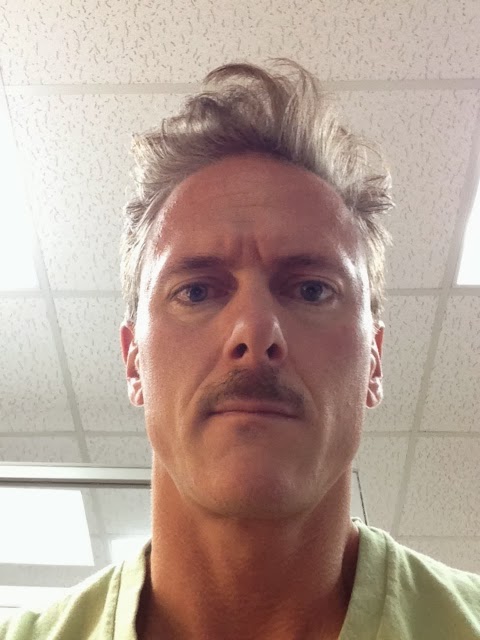 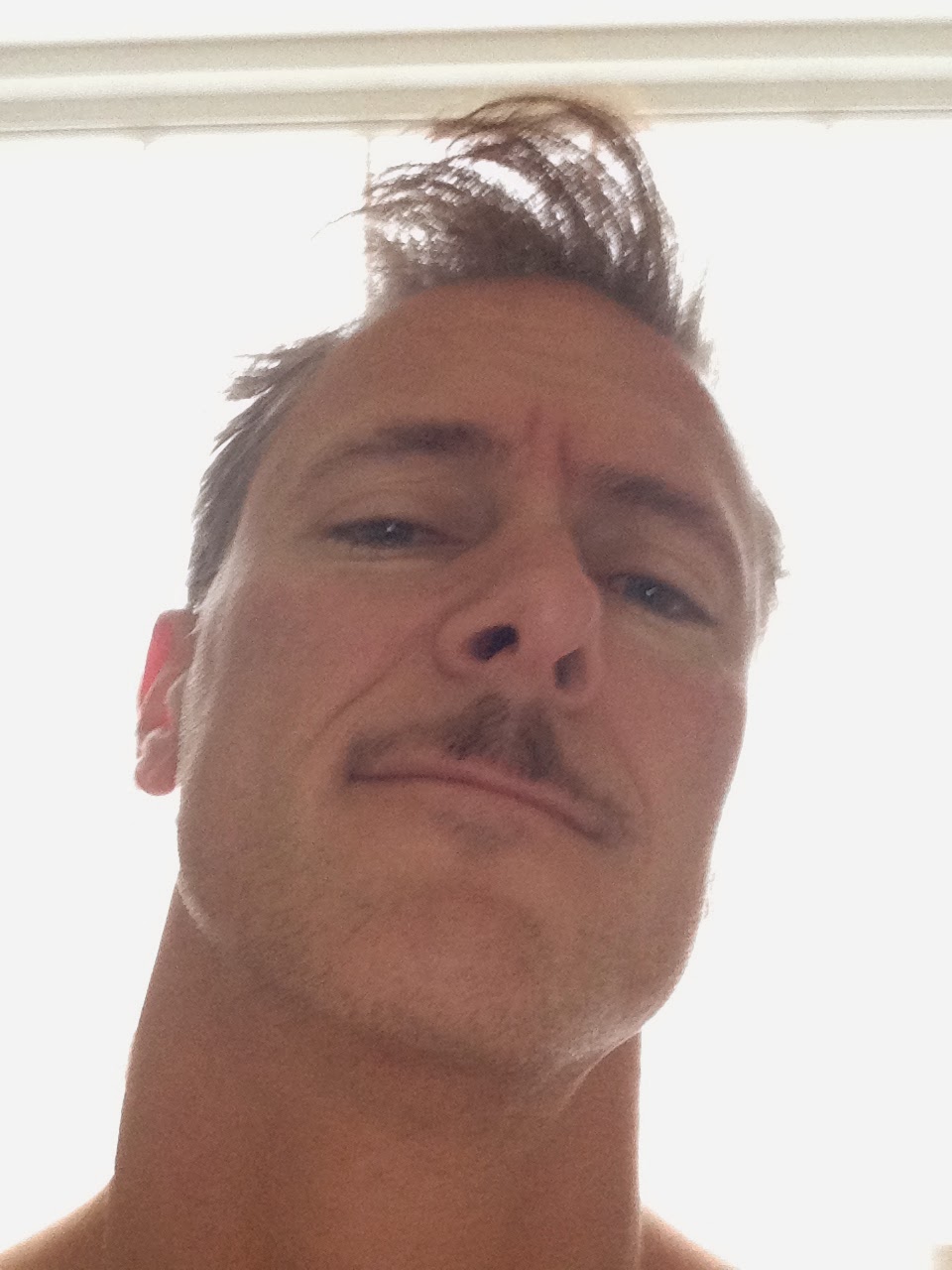 (Day 38)
Unexpectedly, Porter flew the coop. What remained became known as Calrissian, giving me an extreme sense of serenity and self-satisfaction. Unfortunately, culmination of the project is nigh. 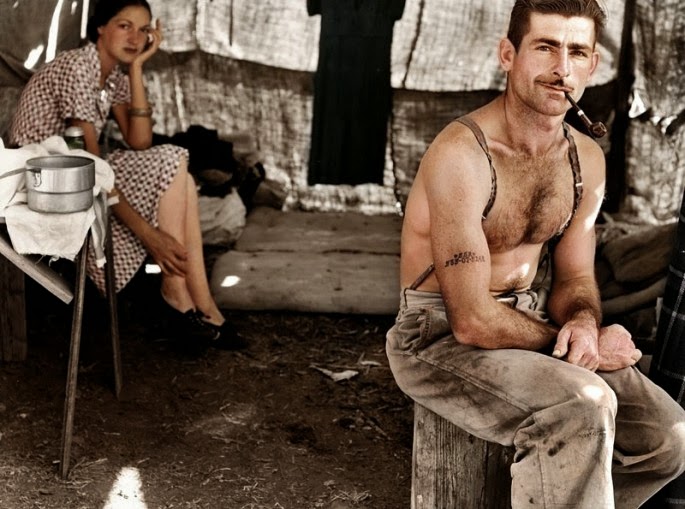 (Day 41)
I really wish I had some leather suspenders, dirty jeans,
and a bored-looking broad with itchy gams.
I sooo wanted to be like this unemployed steel worker from 1937. 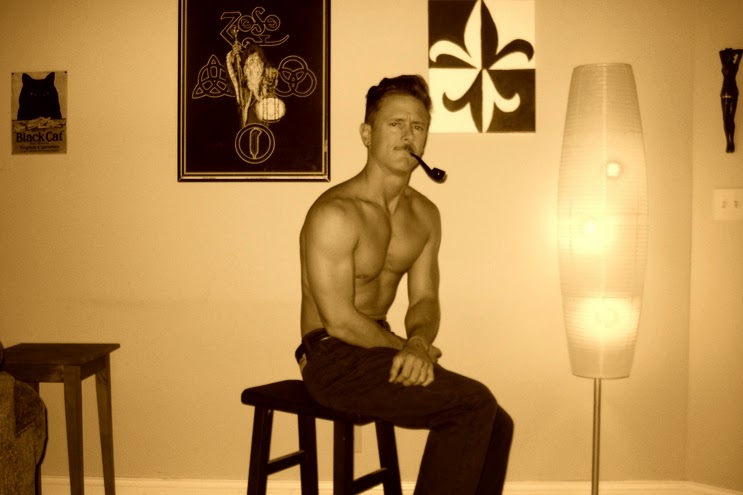 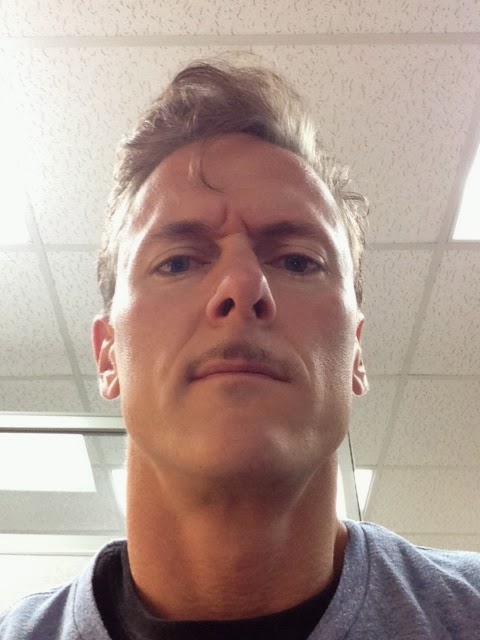 The Vincent Price rendition is a FAIL.

Results:
1 vote FOR; infinity votes AGAINST.

Apropos of nothing, two of these men are married—to women. 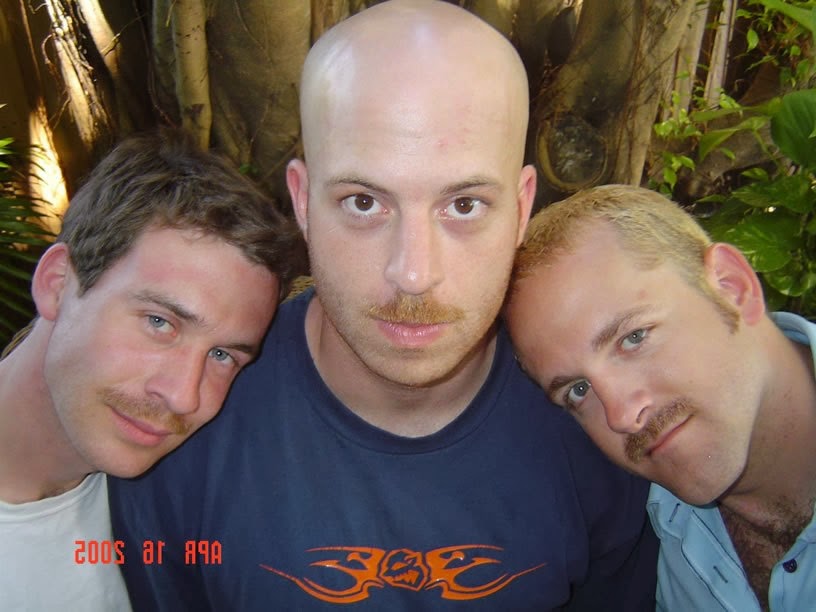 They even have children. The other is my sole champion of Porter and crew, who is dating my officemate, who hates mustaches.
NEXT PROJECT:  Soul Patch or Flavor Saver?

NB: All photos taken with iPhone 5. None altered with photo-editing software except Day 16.


-- ADDENDUM 1 --
[February 21, 2014]
In solidarity with an unnamed Division 1 men's college basketball team who incidentally won the 2013 NCAA Championship and is very close to my heart, a beard is happening.
[The coaching staff vowed no shaving
for the remainder of the season lest they lose.] 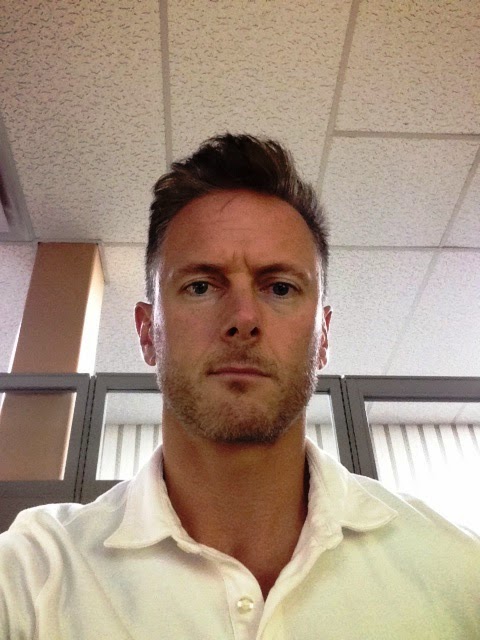 May we all be hirsute come April... 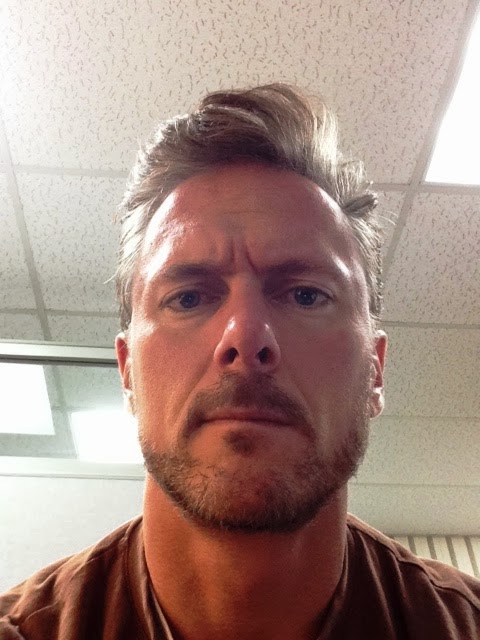 Rat farts. Team lost. Beard stays.
There is time left yet for redemption. 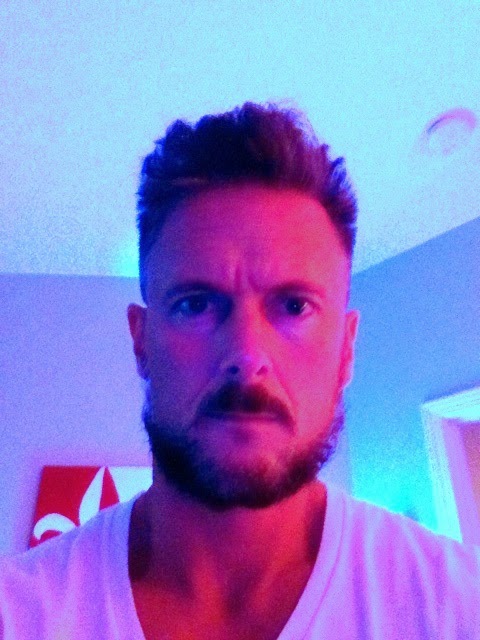 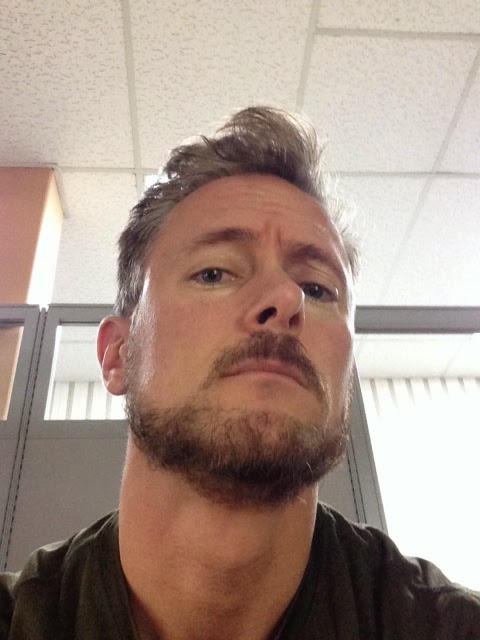 Persistence of beard hangs in a delicate balance.
Tonight, aforementioned team plays highly adversarial state rival team in
NCAA Tournament to advance to Elite 8.
Whatever the outcome, it remains unclear how the plight of a fledgling mustache can wend its way into the intricacies of March Madness… 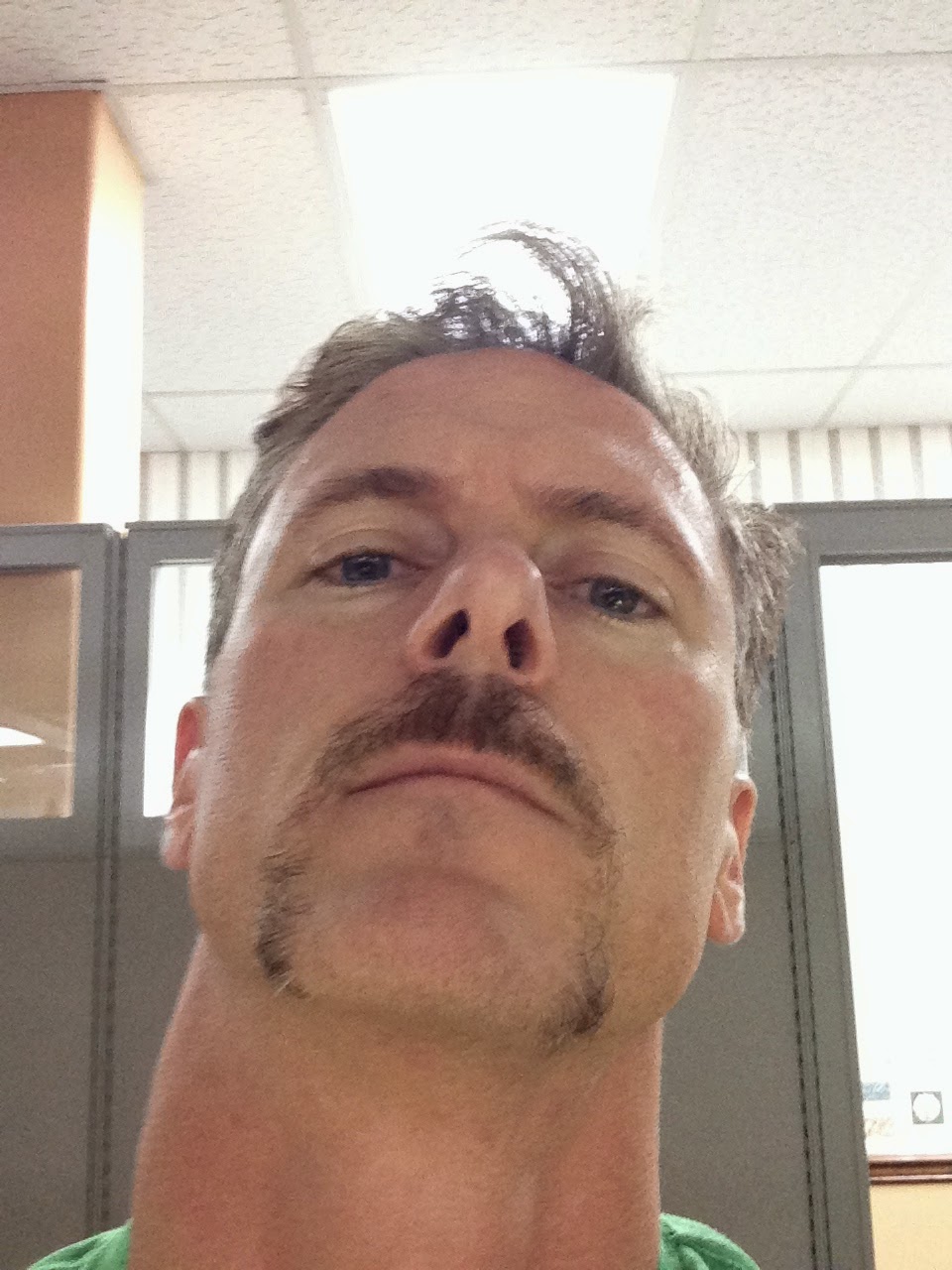 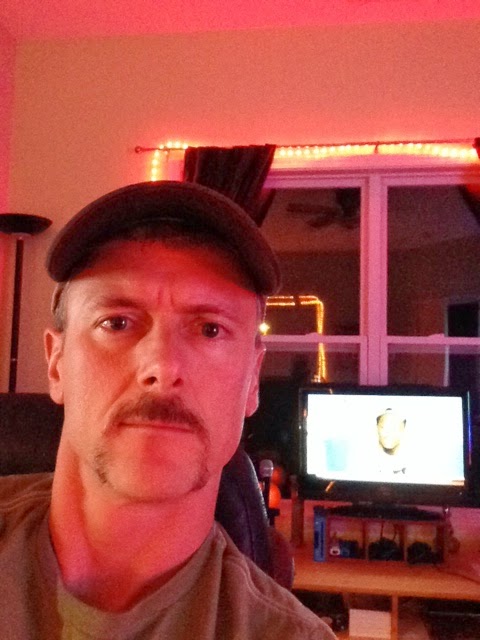 Pressure's off.
State Rival Team proves its mettle and gives my guys the boot.
All that’s left to do is a grow a regionally appropriate Fu Manchu,
and maybe go hang out at the Flying J Truck Stop on I-65 South.


...In the end, it's good to know that I am like most other people in that I have vestigial memories and random thoughts. So while the connection to Project Mustache is tenuous at best, at the gym yesterday it occurred to me that the blow-up auto-pilot from Airplane! the movie
was the spitting image of my dad 25 years ago. 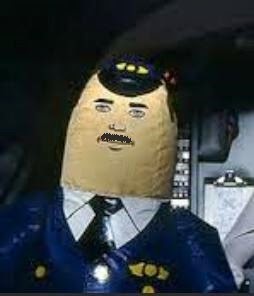 He really looked sharp in that uniform.