Yes, this is a nonfictional place in the world. According to Google Maps, it is 453 feet above sea level, and it exists 28 minutes from my door.

Please note that the tip of Penile Road is poised at the entryway to Blevins Gap. 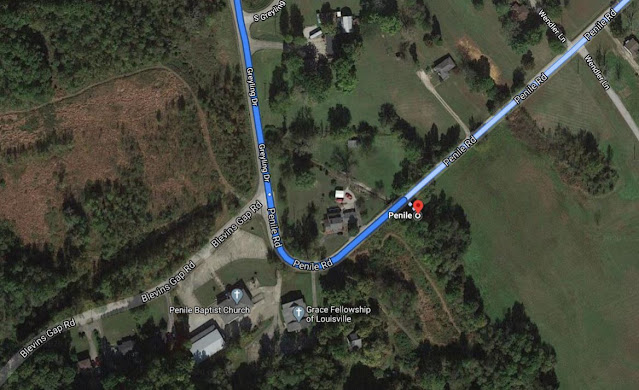 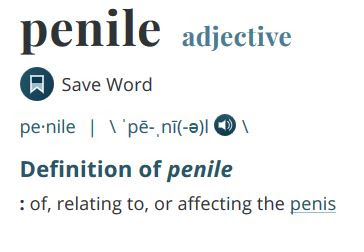 Posted by Waarlowe at 9:57 AM No comments:

I did begin in the humid accented hell of Long Island
I did lick salt from the ceiling of hell
I did drag friends and family to hell and back, some I left
I did cough blood on their hell faces
I did sing hell to get laid
I did decompose years in the dim-lit old man bar of hell
I did punch holes in the wall to see hell unimpeded
I did invent a torture porn hell
I did snort cocaine from hell's breast and thigh and pubis
I did bring hell with me to the stock exchange floor
I did bring hell burning beneath my clothes
I did bring hell to marriage
I did cut chunks of hell-meat to roast over white coals
I did put my thumb on entire continents for the sheer hell of it
I did make movies of hell to run backwards
I did crawl out of hell bleeding
I did drag my body across the surface of the sun
I did leave a good part of me in hell
I did understand: I chose
I chose hell   I am free   I can go back
Posted by Waarlowe at 8:50 AM No comments:

High school. Friday. TJ and I are on the baseball team. TJ is my friend. The fifth period bell rings as I follow him into Mrs. Howard’s class, and just as we cross the threshold of the door, TJ figures it’s a good idea to ball his fist and punch me directly in the nuts. No one really notices—or cares—as I crumple over in teeth-gritting anguish, limping to my desk. But TJ thinks it’s a hoot, the son of a bitch.

Mrs. Howard scratches some nonsense on the chalkboard. She has enough trouble holding my attention teaching whatever it is she teaches, and now with a nagging scrote-ache and vengeance roiling in my soul, I have 54 minutes to scheme…

Tommy is on the baseball team, too, and he is also my friend. The last time he smacked me in the goods was like two weeks ago. It was a typical, flabby backhand kind of swat, which is tacitly permissible because the shock of such a blow can often be more astounding than it is painful. One might just “nip the tip” for instance, causing a mild sting in the frenulum—yet the adrenal surge effect has been achieved. It’s more about terrifying your adversary than causing him bodily harm and extended suffering. Also, you’ve proven in that moment who’s boss. You’ve pulled one over on him when he had his guard down. This engenders an odd sort of respect, maybe even admiration for the perpetrator of the “waboosh,” as we like to call it. It’s a rarified moment of connection and understanding between victim and victor, in a Stockholm Syndrome kind of way.

So since then, I have forgiven Tommy… after of course executing a mild tit-for-tat in the parking lot last Tuesday. Now we’re all square, Tommy and me. He, too, has been oppressed by TJ’s ball-bullying—just after practice a few days ago, in fact. Tommy had just fished his cup out of his jock in the locker room, rifling in the top shelf of his locker when TJ pulled an up-and-under strike. A reverse karate chop that was so precise in its delivery, that it sent Tommy’s left and right balls careening in separate directions. Directions that balls are not meant to go in. I pass Tommy a note with three words on it:

Tommy nods to me, stone-faced as a clam.

Chris is here, sitting a few desks back. By the look on his face, he witnessed TJ’s sneak-attack upon our entrance. Tommy hands my note to Chris, who also nods my way with approval. To my knowledge, TJ has never popped Chris in the junk, but there’s a glimmer of excitement in his eyes as he crumples the note in his hand. Deep down, I think Chris is a sadist.

Mrs. Howard dismisses us. Tommy, Chris, and I huddle up on our way to our school newspaper class, which is gheyly titled The Chit-Chat. TJ embarks on his route to Chemistry, flirting with the pert and sassy cheerleader known as Dara Thompson. Despite Tommy dating one of the hottest girls at Waggener—a blonde bombshell and captain of the Swim Team named Lynn—he is none too pleased by this dalliance between TJ and Dara. Because, clearly, in his heart of hard-ons, Tommy wants to sock it to Dara someday.

At any rate, Mrs. Draut doesn’t give a shit what we do with ourselves in Chit-Chat. Chris explains to her that the three of us need to interview some student-athletes for a collaborative story we’re working on. Draut absentmindedly dismisses us, and our three-man coalition heads upstairs to Mr. Thorne’s chemistry lab.

Chris knocks politely, with Tommy just to his right. I crouch behind the corner, partially hidden by Tommy. My brothers-in-arms smile through the square wire-mesh portal of the door at TJ, beckoning him out. Mr. Thorne answers.

“May TJ be excused for a moment, sir?” Chris asks. “We want to interview him about tomorrow’s playoff game against Seneca.”

“Of course he can,” says Mr. Thorne, grinning goofily.

TJ saunters to the doorway, also grinning. No doubt winking an eye at Dara. A proud jock peacocking among the plebeians.

Mr. Thorne has barely closed the door behind TJ when I make my move. My open palm swooshes around the door, cupped with kung-fu ferocity, and I get a fleeting but deadly handful. There is a sweet smacking sound, like someone dropped wet bologna… TJ’s hips jut back; his knees buckle. His throat grunts out the sound of a Maine Coon vomiting a furball. His hair goes from perfectly combed to a sloppy mess, and his chin hits the floor tiles first because his hands are busy clutching the kill zone. He bites his tongue in the process and a satisfying glaze of sweat pops out on his reddening forehead.

“Ha-haa! Haaa! Didn’t expect that, did you!” I loom over him, seething.

Tommy and Chris cackle—celebratory-like—as if I’d just tattooed one out of the park. Then we scurry away.

Looking back, we see TJ writhing, groaning on the floor in a puddle of sweat and drool. My blow was a real haymaker—the kind that induces nausea, along with a reflective urge for a man to take a long, hard look at all his former transgressions. Because anything that led up to a vindication of this nature had to be earned, not unwarranted.

Tommy and Chris are doing their best to squelch their laughter, to keep our retreat covert. But not me. I skip crabwise down the hallway so I can drink in an eyeful of TJ’s twitching corpse—to admire my work—with my arms extended, fingers pointing skyward, roaring, “I win!”

The shambling mound that is TJ rolls its eyes around in despair and can barely focus on we, the executioners of his undoing. But this gruesome scene has not yet sated my bloodlust. This retribution isn’t paid in full until the agony of his injury is garnished with a delicious insult.

A very long three minutes pass for us back in the Chit-Chat press room. It’s about to become a Situation Room.

TJ stumbles downstairs, spilling out into the corridor where Tommy is stationed. He signals to me inside the classroom. There is a table near the doorway with—inexplicably—an empty Styrofoam cooler on top of it. I mount the table and pick up the cooler. TJ staggers to the threshold, glassy-eyed, with blood in the corner of his mouth. He looks like he was picked up and set down by a tornado.

When his blonde, prematurely thinning hair pokes through the doorframe, I jump off the table and break the cooler over his head like Macho Man Randy Savage coming off the top rope with a folding chair. Pieces of white foam explode on TJ’s head and swirl around him like flakes in a snow globe. The class guffaws in unison. Tommy’s mouth gapes in a wheezing paroxysm of laughter. This finishing touch is so exquisite, that even TJ can’t help but chuckle. I’m hysterical, too, stepping down from the table and raising my hand to high-five TJ. Smiling like a dazed idiot, he reciprocates to slap my palm, but with my other hand I clobber him in the nuts again.

And, as you can see, my brotherly love and my animus knows no bounds…