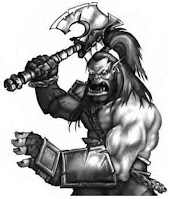 When Beafst emerged from his mother’s gurgling birth canal, his head was so enormous, the attending orcish shaman suspected the infant had consumed his prenatal siblings in utero. Pregnant orcs usually pump out five or six pupae at a time: oddly, Beafst’s mom, Zorabucat, begat only this one baby monster. Also, orcs are naturally born toothless; Beafst had an adolescent-sized snout, maw, fangs, and tusks. While she survived the delivery, Zorabucat succumbed to an infection a fortnight later. Her shaman attributed the disease to Beafst’s unholy gestation within her womb. From his very conception, there was something unspeakably brutish and sinister about this orc, born in a forsaken slum at the feet of the Blemu Hills.[1]

Beafst quickly grew into a man-child, his hulking body now accommodating his huge, snarling melon. He would scurry about the orcish hamlet of Volgor, bullying neighbors for fun. Even the bigger, older guys cowed to his blistering aggression and general repugnance. After drinking himself (extra) belligerent on Moose Piss mead, he reveled in menacing those who pissed him off… which was pretty much everyone. At age 12, he forced a local ranger into forking over his quarry after the crepuscular hunt—not because Beafst wanted to eat the rabbits and squirrels, but because he was just mean. He then threw the game into the street, squatted, and dropped a load of explosive, runny turds on it, right in front of everyone. Did he wipe? Guess.

Outside of beating people up, Beafst wasn’t good at anything. He was arrogant, uncouth, unfriendly, stupid, ignorant, impatient, and impetuous. And he lacked focus. But he did win the title of the third annual Volgor Pussy Eating Contest… when he literally scarfed down seventy-fucking-eight newborn kittens in ten minutes.[2] He was also determined—to do anything he wanted and take anything from anyone—to expressly satisfy his whims, no matter who got hurt. Consequences be damned was his favorite mantra. That, and fuck everybody.

That’s a shame, because in a late-night raid under a dead moon, a pillaging group of ogres from the Adri Forest seized upon Volgor. The hoard killed and abducted dozens of orcs; Beafst was among those shackled and bound. A convoy transported the captives hundreds of miles east to the Bay of Gates… into the sinuous granite alleyways of the slave trade. Beafst volunteered to be a sex worker but, alas, his brawny frame made him uber fit for forced labor.

Five months into smashing rocks at a shitty mining development, a geological anomaly helped Beafst regain his freedom—a volcano blew its top. The shocking violence of the eruption was mistakenly believed to be an assault from the most infamous denizen of the nearby Gull Hills: a nightmarishly beautiful red dragon named Volkarivorkim.[3] Security in the mine shaft were unprepared for (and abundantly panicked by) the prospect of another attack from the great wyrm. As lava burst through the tunnels’ fissures, guards and slaves alike sprinted in all directions. Pandemonium... Beafst see way out!

Lost, Beafst foraged for survival, traveling further east until he reached the Free City of Roland where he became a loading dock stevedore. He earned two silver pieces a day, plus a platter of lambchops and collard greens and sometimes bloodroot. He could afford all the Lathander’s Red ale he wanted to fill his demon-themed tankard[4] with. He also had a roof over his head, which was nice. But when a shady fisherman named Pübekakes[5] offered him a gig as a deckhand, the call for adventure and “unknown treasures” on the high seas was undeniable. Beafst would set sail—fittingly on a cold, foggy Watersday—wondering when he’d get to rape his first mermaid, or merman.

It wasn’t long before he learned that just about everything you murdered in the ocean was not only fun, but also delicious. The only thing that pissed him off was that there wasn’t enough pussy… and Pübekakes might have to do. Alas, this was his new life, and he considered poking out one of his own eyeballs so he could wear an eyepatch. But before he lanced his orbital socket with a harpoon tip, Pübekakes reminded him that Gruumsh[6]—with his fluffy, menacing unibrow—might frown upon a “stinkin’ scabby sea bass like you imitatin’ the old One-Eye.”

This too pissed off Beafst, so he harpooned Pübekakes in the face instead. His impulsive mutiny earned Beafst the command of a small vessel he did not know how to sail, and he was once again adrift. Until finally, after days of catching fish and buttfucking Pübekakes’ corpse, he reached the Sword Coast…
[1] In Bone March.

[2] To this day, he remains the unprecedented, record-setting champion. [6] Gruumsh, orcish greater god, depicted as being pissed off. 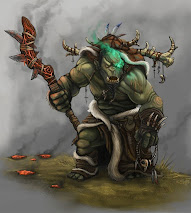 Author’s Note: I just realized this is basically a biography of Mike Tyson.
Posted by Waarlowe at 3:43 PM No comments: