I found the original editor's cut of page 137 in the PathfinderTM Bestiary. Found it in a dark, prickly cockle of mine heart. 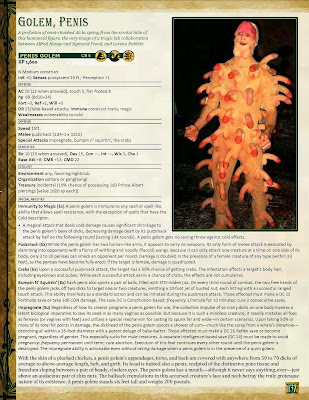 In all honesty, I do not have a lot of free time. I just choose to make stuff like this over going to bed at a reasonable hour.

Posted by Waarlowe at 2:52 AM No comments:

Yankee Candle Will Steal My Idea


Whilst putzing around a late summer art festival last weekend, I turned to the stranger next to me and said, "Yankee doesn’t make a candle for this pervasive, unmistakable aroma. And they should.”

The stranger arched his brow and glanced at the Port-O-Lets.

“Nevermind!” I said. Bastard might steal my idea if he catches wind of the heavenly wafts coming from the food trucks.

It’s like being on a fairground midway, like being at World Fest, except it only smells this way in America. Grilled, fried, shamelessly artery-clogging. So appetizing it could make you hungry even on Dexedrine. You know what smell I’m talking about.

I like going into the Yankee Candle stores twice a year and spending about 45 minutes opening each flavor to give it a sniff. I don’t buy anything. When the smiling floor clerk ladies ask if I’ve been helped, I explain that I’m helping myself and glare at them until they go away.

So I wrote to Yankee Candle and told them about my idea. It would be a special challenge, I explained, because it’s such a mélange of aromas all flourishing at once—grilled onions and peppers (especially), sizzling swine, chicken, and other beasts, funnel cakes, pizza, kettle corn, chocolate-covered bacon, bacon-wrapped Oreos, fish tacos, kabobs, pickle-corndogs, Belgian waffles, BBQ, cinnamon buns, deep-fried bubblegum, fried ice cream doughnut burgers… If it sounds inconceivably gross, but smells fuckin awesome, they’ll feed it to you at the State Fair.

Which is why my candle would be called: State Fair

It seems to be a magical process by which the chemists at Yankee Candle fabricate the aromas, and this is why they have me by the balls. I can’t do the magic trick, so I can expect no royalties. (In fairness, I did pretty much deliver my idea straight to their Research and Marketing department.)

I even forwarded them some artwork for the label.

So if one day—say around Christmastime—you’re in a Yankee Candle outlet sniffing up a storm and you see State Fair on a shelf... you're welcome.

Posted by Waarlowe at 8:31 PM No comments: