The Background of Bophades Gnutz 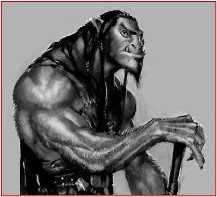 Like most half-breeds, Bophades was born the son of a rape victim in the bone-chilling wilds of the Iuz Empire. You’d think his mother, Tiffany Gnutz, was the human—but no. Because Bophades’ father was both evil and insane, he did not care that Tiffany the Ogress had hairy tits, a cleft lip, and smelled like a yeasty codpiece. Nameless to Bophades, his father led sporadic bandit raids in the foothills overlooking Dorakaa. On such a raid he overpowered Tiffany in a barn and filled her snatch with his intellectually-superior human jizz. After the raping, Tiffany’s flight through the stony terrain separated her from her tribe. The pregnant and bare-hoofed ogress dragged Bophades’ older brother Gnum by the hand, and fled west.

The two starving refugees covered hundreds of perilous miles before Tiffany pumped out Bophades in the muck of a fetid marsh, whence Bophades chewed off and gobbled down his own umbilical cord. Infant half-ogres are surprisingly mobile, becoming ambulatory at only two weeks. (They knuckle-drag like an orangutan.) Seeing the torchlights of a trading post ahead, the trio hit the banks of the Dulsi River—just downstream from the wretched hive of scum and villainy known as Greenreach.

Greenreach is predominantly peopled by humans and orcs, most of whom are assholes. This is where Gnum Gnutz taught Bophades Gnuts how to fight—bare-knuckled and for money. Ogre genes grow you up fast, so in the prime of their adolescence, the boys capitalized on the locals’ affinity for lawlessness and depravity. Gawkers splashed copper and silver coins at their feet just for pummeling each other senseless. Usually, these tussles were embittered acts of violence, inflamed by profound animus between the boys—mainly because Gnum Gnutz was such a dick! But both boys were stalwart absorbers of punishment, their fighting style and marathon melees always a crowd-pleaser.

As a full-bred ogre with two years on his little brother, Gnum Gnutz had a formidable advantage of girth. But Gnum was kind of a retard, only drawing from a repertoire of clobbers and haymakers, wild jabs, and no defensive sidesteps or blocks. By age 14, Bophades had mastered bobbing and weaving. He often outfoxed his mightier opponent, grappling Gnum to submission or knocking him cold with a flashing uppercut. Bophades, luxuriating in his rising man-child glory, would scrape up his coins amid cheers and then promptly spend them at the Belching Bugbear and the Lion’s Den.

In the rowdy streets below Panshazek’s Tower, a mercenary promoter named Choakzondik took note of the boys’ talents and introduced them to the lucrative underground sparring circuit in Greenreach. He recruited them to compete in cage matches—sometimes against each other—though often in tag-team affairs with other recruits. These were not to-the-death beatdowns, and even the losers would take home a day’s wage in a matter of minutes. But the unbridled violence in their ass-whoopings would never fail to entertain the city’s spirited throng. “The bloodier the better,” Choakzondik would tell his punch-drunk gladiators.

One sultry Wealsun night, Bophades found himself nursing a ruptured left testicle from pounding his pud too aggressively. Choakzondik showed no pity and insisted the young half-ogre make good on his scheduled bout. So on this night, Bophades was embarrassed in the ring by a visiting mountain orc from the Howling Hills, Burt Crabtree, who beat the shit out of him. But at the nearby Post-Brawl Tavern, Mr. Crabtree had the decency to buy Bophades a no-hard-feelings consolation beer, which Bophades refused to accept because he is devoid of all grace and civility, because he has an 8 charisma. Instead, Bophades flipped the tankard of Svirfneblin Stout into Burt’s face, resulting in a post-brawl brawl. Gnum, muscling in to break up the skirmish, met with the slash of Crabtree’s blade as the orc drew his short sword. ‘Twas a critical hit, slashing Gnum’s jugular and causing 5 bleed damage. He bled out within seconds. Before the stunned crowd could respond, the Greenreach militia stormed the scene. Bophades clawed, bit, strangled, and clobbered the four guardsmen who eventually hogtied him like Bri and Jay Krauss hogtied Pat that one night. Despite being escorted out of town (for eternity), Bophades’ last stand was the best fight he’d ever lost.

Even though Gnum Gnutz treated Bophades like a piece of shit pretty much his entire life, he shared a certain bond with his older brother. He looked up to him—figuratively—but mostly literally. They did enjoy hog-porking together on Sundays. Vowing to avenge the death of Gnum and the broken heart of his mother, Bophades struck north toward the Howling Hills. He would find that cocksucker, Burt Crabtree, once his left ball fully healed. He would tear him limb-from-limb, teabag his gasping last breath, and spray a steaming diarrhea dump on his face. Oh yes, he would find him…