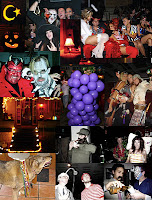 The 5th Annual Halloween Extravaganza was a huge success. With nearly 50 costumed partygoers in attendance, it was a raving night of grand tomfoolery and madness. A nearly full moon hung in clear autumn skies while Jefferson TARC Bus rocked balls in our back yard past 4am. In spite of an actual werewolf in attendance, no one was murdered or eaten.

One highlight occurred amidst a knee-deep strata of beer cans and plastic Jaeger Bomb husks on the lawn, when the Fruit of the Loom Grapes guy fell off the porch and popped most of his purple balloons. In consolation, he was awarded Best Costume. The guy dressed as a Discarded and Rotting Turkey Sandwich ate a whole bottle of prenatal vitamins just to see what would happen. And then the Dish ran away with the Spoon.

The height of buffoonery occurred when, for reasons that remain unexplained, we fired a 19th century elephant gun into the alleyway and blasted out the windows of our landlord’s garage. The chaotic orchestration of these misdeeds incidentally summoned two demons, but both were banished back to their fiery abyss by being defeated in games of sudden-death pencil break.

When the cops arrived, even Officer Pettigrew came in for some of Liz's fabulous spiked cider and chili (little did he know it was vegetarian chili, and little did Liz know that Chris replaced the ground soy tidbits with chunks of Germantown hobos who he'd chopped up on All Hallows Eve, delivering them of their destitution and misery).

A memorable bash was had by all. Thanks for joining us and we’ll see you next year.
Posted by Waarlowe at 10:22 PM